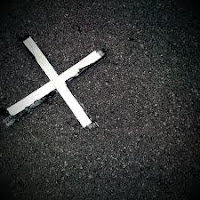 The past week has probably been one of the hardest weeks for me since my diagnosis. Emotionally I was everywhere. One day I was okay with the idea of having an ileostomy and the next day I was consumed by doubt, frustration and tears. It hasn't been the easiest week at my house.

Whenever I had my colectomy, I had a peace about it. This past week however, not so much. I understand the medical concepts that I had been told and I completely trust my surgeon; the surgical process does not bother me. The idea of having an ileostomy and having to accept where I am in my disease really bothered me. It had crossed my mind numerous times to just put the surgery off and keep cleaning out until I am comfortable with the idea of an ileostomy. (It would most likely never happen. I would never be perfectly comfortable. I am the type when it comes to a band-aid, just rip it off.)

I met with my surgeon Thursday to simply talk about having an ileostomy. I had had a week to think about it and I had a ton of questions. Thankfully as I started asking my questions, I started feeling more comfortable about the idea of having an ileostomy. Don't get me wrong, I am not excited to be wearing a bag on my side but I am learning to except the changes and take it one day at a time.


My surgeon explained that my ileostomy would be reversible. In six months to a year if I wanted it to be reversed due to cleaning out or simply because I did not like it, he would reverse it. He did explain that if I was cleaning out again within that time frame, it would only prove that I would be in GI tract failure. He would refer me to a transplant doctor. I have talked to my GI doctor about this possibility. It is a enormous medical feat, something that requires vast amounts of drug therapy. Thankfully today I am not there and I do not have to make those decisions. As for the ileostomy surgery, it would be somewhat comparable to my colectomy since I have GP. He wasn't able to say for sure that I would get an ileus after surgery because everyone is different. I ask him about nutrition and my history of weight loss after surgery. Normally when an ileostomy is placed, you do not lose weight. Unless my bloodwork comes back with low protein levels, I will not have to have TPN (thank goodness)!


Like with my colectomy, we aren't sure if this surgery will work. Most people who get ileostomies, can't stop going to the bathroom. I on the other hand can't start going. They aren't sure how my motility will play into this. I will have to learn how long it takes for food and liquids to travel my tract and go into the bag. The slower I empty, the smaller a bag I can have. 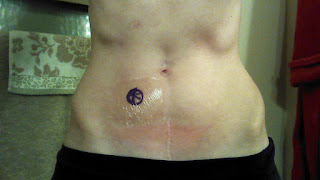 I met with a nurse who only deals only with ostomies. She was extremely nice and informative. She showed me different types of ileostomy bags. I honestly didn't know there were so many different styles and types. She gave me some really good resources. She went ahead and marked me for surgery. (The redness in the picture is from the rash I get when I clean out. This was the morning after the rash went away. The rash will leave an imprint.) The best part is that during my hospitalization,she will be there to help me as I learn how to do this myself. It is one thing to see it, it is another thing to actually do it.

My surgery is April 8th. I was told that I should be in the hospital five to seven days but with my GP maybe more. They are going to give me a different type of pain medication besides morphine. I do not do well with morphine. After talking to both my surgeon and the ostomy nurse, I felt much better about having an ileostomy. I am not excited about having to wear a bag but it is what I need to do and I am going to make the best of it. I just need to take it one day at a time and remember that it is not permanent.