An Appointment with the Nutritionist 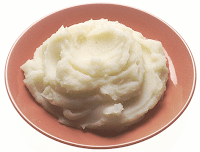 I went to see my nutritionist for the first time last week. It went better than I had expected. On the phone she asked why I was seeing her and what medical conditions I had. When I told her I had Gastroparesis, her comment was “Oh my”. That left me feeling as if I might as well be throwing money out the window. Lately I’ve been getting that from people including doctors, beauticians… nobody wants me! I’m too complicated. However I did learn a lot at my appointment. Who would have ever thought that those mashed potatoes that I load down with butter and salt are the most nutritious thing I eat. (Pretty sad… but I’m not complaining I LOVE butter and salt!)

I did give my gastroenterologist a call and to tell him that I wanted to be referred for a second opinion. Over the past two and a half weeks I have been chugging four capfuls of Miralax down a day in hopes of “stimulating” my lazy intestines that haven’t functioned all summer long. When I told him that it hasn’t worked and all it has done is make me look extremely bloated and miserable his response was “Oh my, that’s not good.” He decided to schedule me for some more tests to see how functional my intestines are. As for the second opinion, he preferred the Mayo Clinic or Temple University Medical in Philadelphia. So as of yesterday, they are trying to get me an appointment at Temple and I still get to be a regular GI patient in Winston which is wonderful! I have been so stressed and confused over that. Which hospital do I pick? What if I can’t see my gastroenterologist anymore because I went somewhere else for a second opinion? I need to relax and stop worrying over this stuff.

Posted by Jennifer Shumate Church at 11:49 AM 5 comments:

I have been putting a lot of thought lately into what my blog consists of. My blog is not one of these happy, warm and fuzzy, “it’s all going to be okay” blogs. It’s real, I try to not sugar coat things. To me, my blog is where I go to blow off steam when I frustrated with my GP, keep track of my progress whether it be good or bad and hopefully help someone who has the same condition that I do. I remember when I was first diagnosed, I was clueless. I was continually searching on Google and then I ran up upon a GP site and the rest is history.

I have had three doctor appointments over the past two weeks and they have been a lot to take in. I went to my gynecologist and I somewhat filled her in on what has been going on this summer with my GP. By the end of the appointment I had been told I needed to see my gastroenterologist for more than five minutes because since he was spending so much time with colon reconstructive and colon cancer patients he should give me more of his time because I was going to be one of “those” patients. (Not to mention that my father and grandfather had colon cancer.)

As for my gastroenterology appointment, I was a little on edge. We had the gastric pacemaker, the possibility of a feeding tube and my magnesium citrate rituals to discuss. We go back and I step onto the scale, I weighed wearing shoes and two layers of clothes (every little bit helpsJ)… I weighed in at 104.8. At the last appointment I weighed more than that and I was told to gain weight to avoid getting a feeding tube, today I was under that ideal weight. We wait for him to get come into the room but he never does, some other doctor is filling in for him today, he’s busy. I have waited four months to see him. I have been told that we do not share doctors. I frankly don’t care if he’s busy, I’ll wait all day if I have too. I realized when listening to this doctor that I would have to wait another four months to speak to my doctor and that just didn’t go over to well with me, not to mention I didn’t like this doctor’s bedside manner. The only thing I learned at my appointment was that I am dehydrating, my intestines/colon are as bad as my stomach and that two vitamins are enough. Hello?..... one third of my hair is gone!! As we were leaving he came back to stop us and told me that my normal GI doctor was in the office and wanted to see me. THANK GOODNESS!! I spoke with him for about ten minutes about several other things that had been bothering me. When he had told me that I was on the pacemaker list, he gave me the option of going to another hospital for the surgery. I wanted to talk to him about that but it did not seem like the time or place. The pacemaker or feeding tube was not brought up. I left angry and confused.

My last appointment that day was with my neurologist. I have had migraines for several years. Whenever my neurologist found out that my GP was affecting my diet, he wanted to keep a closer check on my migraines. I told him that I have been having an average of two headaches per week. Growing up, I never had headaches or migraines. When the stomach issues started, here came the headaches and migraines. He said that the headaches were from a lack of nutrition. He referred me to a nutritionist. I told him about what was going on with my GP as well as with my GI. He told me that I might want to consider going to the Mayo Clinic. He said he would be willing to do the referral for me. The choice was up to me, the Mayo Clinic or Duke for a second opinion.

So now I am extremely confused. What do I do? I am worried that if I do decide to get a second opinion, I may not be able to continue to see my GI in Winston-Salem. The waiting list at the Mayo Clinic is six months which is a long time but I have a four month wait until my next gastroenterology appointment. What to do… what to do??