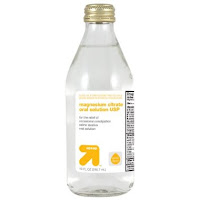 Since my colectomy in September 2011, I have drank 188 bottles of magnesium citrate. The bad thing is is that my clean outs are no longer working like they are suppose to. After trying several different approaches, the only thing that seems to be working is significantly increasing my clean out routine; 1 bottle of magnesium citrate, 8 dulcolax tablets and 8 tablespoons of milk of magnesia.

In November I went for my hydrogen breath test. I had to go ten days without cleaning out. On the third day, I honestly did not think I would make it through the test without cleaning out. However I toughed it out and made it. One of the nurses administering the test said she had never met a GP/motility patient who had to clean out like myself. The test results came back revealing that I did have bacteria in my small intestines.
I went to see my neurologist in early November. I have been suffering from complicated migraines since my late teens. Before being diagnosed, they were believed to be seizures but turned out to be complicated migraines. I will feel the migraine coming on and I will experience a numbing sensation on one side of my face. It will last for a couple of minutes. Now they are controlled by medication and rarely happen. I do however get general headaches. I started getting them when I started cleaning out. It has got to where I take a prescription migraine medication and a lot of ibuprofen but my headaches will still not go away. After talking to my neurologist several times about nutrition, dehydration and my clean outs, he referred me to another neurologist to handle my general headaches. I really liked her. She talked to me about how my gastroparesis could be causing my migraines. It made a lot of sense. She explained that my brain was very easily irritated. If I consumed certain liquids or foods that had certain chemicals, it would irritate my brain and cause me to have more headaches. Ibuprofen was another irritant. Too much ibuprofen can make you have a headache instead of getting rid of one.

Over the past month or so, I have been struggling with my energy and weight levels. Because I am stubborn, I think that I can handle things and get them back into control. There have been several times while showering that I didn't think I would be able to finish my shower because I was so weak. I am up a lot during the night so it has been a struggle at times to get back to my bed without passing out. My pulse has been ridiculous. Lately my chest has got to where it physically hurts. My legs and arms feel like jello. My weight has dropped to eighty-two pounds. With that being said, I am calling my doctor. I feel weak and horrible not to mention my physical appearance.
Posted by Jennifer Shumate Church at 6:33 PM