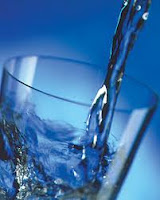 Whenever I clean out I get so thirsty especially during the night. I have learned that if I stop drinking any liquids after 6:00pm, I will be able to get a better night's rest which means fewer bathroom trips. I learned the hard way that if I get up during the night I am more prone to black or pass out. If I drink fewer liquids after 6:00, hopefully this will prevent this from happening. The downside to all of this is that it leaves me feeling extremely thirsty.

The past month or so has been pretty eventful. One morning I struggled with my pulse. I woke up and it was 164bpm. As the day continued, the lowest I could get my pulse to was 145bpm. When it runs that high, it wears me out. Another morning, I woke up really early after cleaning out the night before and went to use the bathroom. I locked the door of course. At 5:30 in the morning, honestly who is going to walk in the bathroom on you? No one, but I am the type person who locks the door at all hours of the night. I have to stop this habit. Anyway, I sat down on the toilet and felt that feeling come over me. I got up and unlocked the door. Luckily my mom was up and heard me moving around. She happened to open the bathroom door just as I was passing out on the toilet. My brother and I had the conversation later. Of all the places in the world, I pass out on the toilet, half naked. I personally think I need a different place to pass out at. I need a place that provides me with more dignity.
I went to the hospital earlier this month for testing. I was suppose to have a gastric emptying scan, a hydrogen breath test, an electrogastrogram and an endoscopy. I had to go five days without any medications or cleaning out before the gastric emptying scan could begin, my first test. There aren't a lot of kind or appropriate words that I can use to describe those days without my medications and clean outs. I would wake up each morning and as soon as I would sit up, it was like a concrete wall of nausea hit me. I continually had chills as if I was running a fever. It was not an experience I would want to go through often but it was worth it to get the test results. That Monday afternoon the day before my testing started, I was sitting at our kitchen table reading over my papers and filling out my medication list. I had read over the papers numerous times but when I read over the hydrogen breath test papers, I had missed something very important. I was suppose to be ten days without a colonoscopy prep/clean out. When it was time for my test on Wednesday, I would only be seven days without a prep/clean out. I automatically went into a panic and called my doctor's office. My doctor's office called me back and said that I had to go ten days without a prep. I told them that I had had this test twice before and had never had to go ten days without a prep. I wasn't even sure if that was physically possible for me to do. I was already feeling like I was pushing the limits and I was just at day five without cleaning out. She told me that most people have to go fourteen days without a colonoscopy prep/clean out for this test. In my case, they were letting me go ten days. The previous tests that I had had in the past were false positives because of my clean outs. I had to do this test, I needed it. As soon as I got of the phone, I lost it. I called Jacob in a melt down crying. I had totally messed up. How could I have missed that on those papers?! I now have to redo the test and go ten days without a prep. I have learned a very, very important lesson. Read, read and reread your test prep instructions. I am over being upset about the change in dates. The soonest available date for testing was November 26th so I will be skipping on any Thanksgiving festivities and foods. It will be a liquid holiday for me which is fine. I have to make it ten days regardless.

I went on Thursday and had my final two tests done, an electrogastrogram and an endoscopy. The first test was where I drank 800cc of water and then they just monitored my stomach for thirty minutes. I was huge after drinking that much water! After that they took me over to have an endoscopy. Since I have now had six endoscopies, sedation isn't as easy as it use to be. Previously they would give me Fentanyl and Versed. At one of my endoscopies, my doctor expected me to be out and I said no, I am still here. This time they gave me Benadryl, Fentanyl and Versed. My doctor had stepped out of the procedure room and I was talking with one of the women who works with the GI department. The nurse said she was going to start the sedation. She explains that she was giving me Benadryl. I do not take Benadryl because it makes me feel funny and knocks me for a loop. The two medications hit me and I realized that I was going to pass out mid sentence in a few minutes. I watched her administer the final medication and sure enough, I was gone mid sentence.
I woke up and I talked to my GI. When he came in, he just had this look that he has never had before. All of my other endoscopies have been fine. This time I had a hernia in my esophagus, a bezoar in my stomach, irritation around my duodenum and my pylorus was too small. A bezoar is a mass of indigestible food. He said that he was unable to get the bezoar with the scope and as for the irritation around my duodenum which is the first part of the small intestines, he prescribed Carafate. My pylorus, the opening from the stomach to small intestines was too small. It would need to be stretched and have additional Botox injections.
I see my GI doctor in December so we will discuss future treatment plans then. Right now I am focused on getting through the hydrogen breath test in November. Ten days without any cleaning out is a lot for me to deal with. Everything else can wait until later. After my testing was finished and I was back on my medications, I got on the scales and weighed myself. I weighed eighty-six pounds. That is the lowest I have ever weighed with my GP. When I came home this time last year from the hospital after surgery, I weighed ninety pounds.
I went with Jacob and his family last weekend on vacation. As always, whenever I go more than one day without cleaning out, I will do a back to back clean out and live mostly on liquids. I cleaned out Wednesday and Thursday and left with Jacob's family on Friday. Friday evening I started to get a bad headache which usually happens when I do a back to back clean out then stayed on liquids. My body just can not keep up on that third day. I took Advil, wore my glasses and carried on as usual. I woke up Saturday morning around seven and was greeted with the concrete wall of nausea. I tried to get up and go to the bathroom but I physically could not make it to the bathroom from feeling so physically sick and weak so I just laid back down. A little bit later I got up and tried to make it to the bathroom. This time I made it a bit further and felt as if I was going to pass out so I got back in bed. I fell asleep for a bit and woke up around eight and tried once more still feeling nauseous and weak. I knew that there was no way that I would be able to be ready to leave the house in an hour. I could not make it to the bathroom. How would I be able to shower without passing out? After sleeping in and resting, I finally felt decent enough to take a shower later in the morning and was able to eat a baked potato around noon. I knew that if I didn't get something on my stomach, my headache would come back and I would experience everything all over again. My energy was pretty much shot for the majority of the day. It took me until around dinner to feel like myself. I haven't felt like that in a really long time. It isn't something I want to get accustomed to feeling like. It was however a really good trip in which I enjoyed.