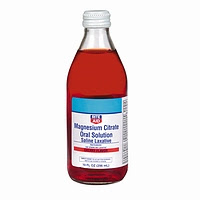 It’s Monday morning and where am I? I’m at home dealing with a slow digestive tract. For the past month and a half I suppose, I have doing the magnesium citrate thing. On Saturday and Sunday my life revolves around ten ounces of magnesium citrate. The purpose of this is to clean out my GI tract of any food that did not get digested. Generally it should take the average person several hours for the magnesium citrate to take effect. It takes me anywhere from twelve to twenty-four hours for it to start working. I make the biggest ordeal out of taking it the magnesium citrate. You would thing I had to drink a gallon of it. I procrastinate in taking it; I will stand there and just look at the bottle. I gag, I grit my teeth, and it is awful. You would think after how many times I have had to drink it I would be use to it. The bad part about it is how it makes me feel after I take it. I am miserable. Overall it could be worse. I could be using the big jug of the Golytely.

Posted by Jennifer Shumate Church at 7:46 AM