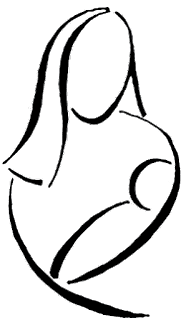 I haven't talked much about my pregnancy and how my gastroparesis was affected. In this post, I want to focus on one aspect of motherhood, breastfeeding or nursing (whichever you may call it). Whenever we found out that we were expecting, I knew from the beginning that I wanted to nurse my baby. There wasn't much information out there pertaining to nursing a baby while having gastroparesis. I thought that I would share my experience and thoughts. However please keep in mind that I am not a medical professional and everyone is different. What works for me may not work for you. You have to decide what works best for you and your family.

Whenever I gave birth to our daughter, my medicine was still limited from the pregnancy. I had stopped taking my migraine preventative, muscle relaxers for when I had a migraine as well as some of my nausea medications. My doctors explained that as long as I nursed my baby, I could not take those medications because my daughter may be susceptible to receive some of the medication through her milk or simply because there wasn't enough medical research.

We had a lactation consultant come to our hospital room for several visits to make sure that our daugther was getting enough milk at each feeding. She was having trouble with her latch so for the first couple of days, she had to be feed with a spoon. The lactation consult recommended that I use a shield to help her figure out her latch. They also reminded me that I needed to remain relaxed. The baby could sense if I was stressing out or tensing up while nursing.

After we came home from the hospital, our daughter would nurse every hour and a half to two hours. We both became more knowledgeable and experienced with nursing so our feedings went smoother. The key for me was to relax. If I remained calm, she had no trouble feeding.

During those first few months, I had enough supply to pump off the remaining milk and supplement her during feeding times with a bottle if we were away from home. As she grew, she started nursing for longer periods so I noticed that I wasn't having as much extra milk. Something that the lactation consultant and pediatrician remind me of was to drink a glass of water every time I nursed. I knew then that this would be where I would have trouble. With my gastroparesis, I have trouble holding and digesting my liquids. It sounds odd, I know. Since I simply couldn't sit down and drink a glass of water, I started sipping and drinking all throughout the day. Some days, I would have less milk than normal which posed a problem at night. There were a few nights where I actually ran out of milk and had a very upset baby. We tried supplementing her with formula on those nights but she did not like it. I tried drinking a tea that was suppose to help with increasing the amount of milk but I never noticed a difference. It just tasted bad. Over time, I finally figured out a plan that worked for me as well as our baby. The day before I would clean out, I would drink Gatorade to help give my body some extra hydration. On the days when I would clean out, I had to constantly be sipping on something. I also had to monitor my output to make sure that I wasn't loosing too much fluid from my medications.

Whenever you nurse a baby, it takes calories. Some nursing mothers lose weight while others maintain their weight. I was unable to eat multiple meals and snacks throughout the day because it would stop my medications from working. Dinner was usually my only meal for the day. At night I learned that if I would snack on something throughout the evening, I could sneak in some extra calories to make up for the nursing. I would go to bed feeling bloated and full but I would sleep through the majority of those feelings.

During my pregnancy, I was extremely blessed to have benefited from those prolactin hormones. It really helped curb my nausea and make it manageable and easier to deal with. Since I was able to nurse my baby, I would still have those hormones which would help with my nausea. My daughter is almost fifteen months old and she still nurses up to three times a day. I have noticed that my nausea isn't as controlled as it once was when I was pregnant and first nursing but it isn't full blown.

Over the months, I have grown to love our feeding times together. It helped establish a bond between the two of us. As with any medical decision, it should be discussed with your doctor. Nursing is a personal choice.