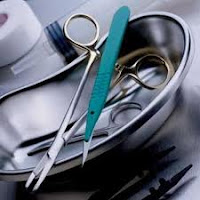 I met with my surgeon on May 13th to discuss the possibility of removing my colon. I have to say I was pretty nervous the night before. I had been fine up until I realized that in the morning I would have my answer as to what the rest of my life could be; a life of continual clean outs or more of a “normal” life without magnesium citrate. I had thought of five, ten years down the road, what condition would my body be in after these continual clean outs. What type of life would Jacob and my family live? Luckily I relaxed and gave it back over to God. I couldn’t do anything about it so I might as well let it go.

I woke up Friday morning feeling pretty well. We got to the hospital and the surgeon was running forty-five minutes behind. I was impressed. Whenever my dad had his colon surgery, he waited four hours to meet with his surgeon. Jacob and my mom went with me so it was nice. My surgeon is wonderful! He was very thorough and had a wonderful bedside manner. He is aware of Gastroparesis and what the disease entails. He said that I was one of the worst patients he had ever saw/operated on (what a comforting thought… NOT!). He said before he could ever consider removing my colon he would want to take me to the OR and do a biopsy of my colon and rectum to make sure that I do not have Hirschsprung’s Disease. The test that I had performed at Temple University Hospital wasn’t as accurate as a biopsy and he wanted to be sure before he removed my colon. I could be in more trouble than I am now. He went on to talk about my diet and nutrition. He was concerned that I wasn’t receiving adequate nutrition since I mostly live on carbs and liquids. He mentioned the possibility of a feeding tube or TPN. I asked him about the possibility of a colostomy bag. He said that I would not have to have a colostomy bag unless the surgery failed and well as my pelvic muscles due to my pelvic floor dysfunction. As for the surgery failing, he said there was no way to tell. He once operated on a patient who had a slow small intestine and he was able to give her eighteen months without cleaning out. Her motility disorder progressed and the surgery failed in so many words and she had to go on TPN and was never able to eat again. He told me that there was no guarantee. My GP may progress tomorrow if I don’t have the surgery and it may not. If I have the surgery I may never have to clean out again and then again I may only have a little while. It’s like a gamble and I am willing to take that risk. He said that my small intestines being slow would not be an issue. First however we have to get that biopsy.

I go on June 10th for my biopsy. We both feel that I am negative for Hirschsprung’s disease. After that if everything is clear, we will proceed with surgery! I go this week to meet with Dr. Parkman at Temple University to discuss all of the numerous tests that have been performed as well as my overall treatment of my Gastroparesis. The next few weeks are extremely busy but I am hopeful and excited!